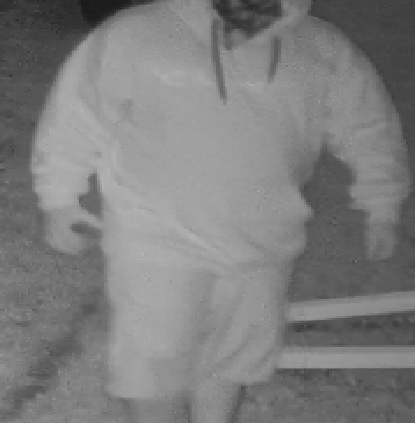 Brantford Police Service are asking for the public’s help with anyone who may know of the suspects identity or have any information related to this case. Please read the Synopsis below for more information relating to the crimes that took place and the chronological order of events.

(Incident #20-29904) On August 5th, 2020 at approximately 4:02 am, a motor vehicle belonging to a resident of the property on Mohawk Street, Brantford, sustained damage to the front bumper from what was found to be gunshots.  The motor vehicle was unoccupied and parked in the driveway of the residence.  The accused had used a firearm, possibly a shotgun, and discharged one round which resulted in seven small holes into the front bumper.  The accused discharged the firearm from inside his motor vehicle as he passed by the residence, as a loud bang and a flash could be seen on surveillance video coming from the driver’s side window.  The accused then fled the area in a motor vehicle described as a 2016-2020 Honda Civic, 4-Door Sedan with five-spoke chrome or alloy rims.

(Incident #20-30527) On August 10th, 2020 at approximately 3:02 am, Police responded to a fire at the residence on Mohawk Street, Brantford.  This is a three-apartment dwelling where several persons reside. Brantford Fire Services were able to extinguish a fire on the rear deck of the residence, specifically where the house siding meets the wooden deck.  An accelerant had been used and this was determined to be an Arson.  The occupants of the home had been sleeping inside the home when the fire was set.

(Incident #20-32071) On August 20th, 2020 at approximately 6:13 am, Police responded to another fire at the residence on Mohawk Street, Brantford. Brantford Fire Services were able to extinguish a fire set to the west side of Mohawk Street, Brantford.  The incident was captured on surveillance video.  The accused could be seen walking down the driveway of the residence.  He then poured an accelerant from a bottle, possibly gasoline, onto the area between the ground and the west side of the residence.  He then ignited the accelerant which resulted in a large ball of fire and caused the side of the house to engulf into flames.  The accused then ran back to the sidewalk and proceeded to flee eastbound on Mohawk Street, Brantford.  Surveillance video obtained indicated the accused entered a motor vehicle described as a newer model 4-Door Sedan, possibly a Hyundai with five spoke chrome or alloy rims and fled the area.  The accused was described as being approximately 5’10 in height, medium to heavy build, and wearing a bandana covering his face with only his eyes visible, a hooded sweatshirt with “Champion” logo on the chest, light coloured shorts, and “DC” brand skateboard style shoes.  The occupants of the home had been sleeping inside the home when the fire was set and this was determined to be an Arson.

(Incident #20-32711) On August 24th, 2020 at approximately 5:31 am, Police responded to another fire at the residence on Mohawk Street, Brantford.  The victim was awoken from his sleep as he had heard crackling and popping sounds coming from his motor vehicle which was parked just outside the residence on Emilie Street.  He observed his motor vehicle to be on fire on the rear passenger side.  He ran to the motor vehicle and was able to extinguish the flames with an extinguisher.  Damage was sustained in the form of the rear passenger side tire deflated, fire damage to the same tire and portions of the wheel well.  The victim did not observe the suspect.  This was determined to be an Arson.

(Incident #20-31027) On August 13th, 2020 at approximately 9:30 am, Police responded to a motor vehicle fire at the residence on Eagle Avenue, Brantford.  The motor vehicle had been parked in the driveway of the residence.  The ignition point of the fire was believed to have originated at the front passenger tire.  Burn marks could also be observed on the front passenger side fender.  This was determined to be an Arson.

(Incident #20-31161) On August 14th, 2020 at approximately 5:41 am, Police responded to the residence on Eagle Avenue, Brantford, in response to another fire.  The wooden front porch of the residence had been set on fire and was extinguished with the use of a garden hose by the homeowner.  Damage consisted of charring on the front deck, as well as the vinyl being melted on the interior and exterior ceiling of the deck’s covering.  A male dressed in all black clothing was observed running from the area.  The occupants of the home had been sleeping inside the home when the fire was set and this was determined to be an Arson.

(Incident #20-32246) On August 21st, 2020 at approximately 7:15 am, Police responded to the residence on Eagle Avenue, Brantford, in response to another fire.  The same motor vehicle that had been set on fire on August 14th, 2020, had again been set on fire in the driveway of the residence.  Video surveillance captured the accused arrive to the motor vehicle at 7:13 am.  He was carrying a bottle that contained an unknown accelerant.  He then poured the accelerant over the motor vehicle and ignited it.  A fire ensued at which time the accused proceeded to run northbound on Eagle Avenue.  He was described as being tall, thin to medium build, his face covered with a white bandana, dark-coloured baseball cap, blue/white long-sleeved checkered shirt, khaki pants, and dark shoes with white soles.  A witness had observed a motor vehicle described as a Nissan or Hyundai, silver in colour, drive southbound down Eagle Avenue several times prior to this incident at approximately 3:00 am.

(Incident #20-33487)  On August 29th, 2020 at approximately 5:29 am, Police responded to the residence on Eagle Avenue, Brantford, in response to another fire.  Again, the same motor vehicle that had been set on fire on August 14th, 2020 and August 21st, 2020, had again been set on fire in the driveway of the residence.  The accused was captured on video surveillance cameras at 5:27 am carrying a bottle with an accelerant inside it.  He then ignited the accelerant causing the motor vehicle to set fire near the rear passenger side.  He then ran from the scene.  He was described by a witness as being a heavy set male wearing a navy blue hooded sweatshirt with white lettering, dark shorts and a face mask.

The male appeared to be the same male that had committed all of the arsons at both addresses.

Attached below are images of the male suspect wanted in connection with this crime. If you are able to identify the suspect in the photographs, please contact the Brantford Police or you can remain anonymous and call Crime Stoppers at 1-800-222-TIPS(8477) if you have information on this or any other Crime. Note you can also submit a tip online by following the link below.

Brantford Police Service & Brant-Brantford Crime Stoppers are asking for your help to solve the homicide of Jeffrey James Roberts who went missing on the 11th of November 2016, he was later found on Monday, November the 21st, 2016 in a field behind a manufacturer on Craig Street in Brantford, near the West Street overpass of Highway 403 deceased. His death has been ruled as a homicide and we are still seeking information that may help solve this case and bring forward the people responsible for the death of Jeffrey James Roberts.If you have any information which may help solve this case please contact Brantford Police Service or you can remain anonymous and call Crime Stoppers at 1-800-222-TIPS(8477) if you have information on this or any other Crime. Note you can also submit a tip online by following the link below.